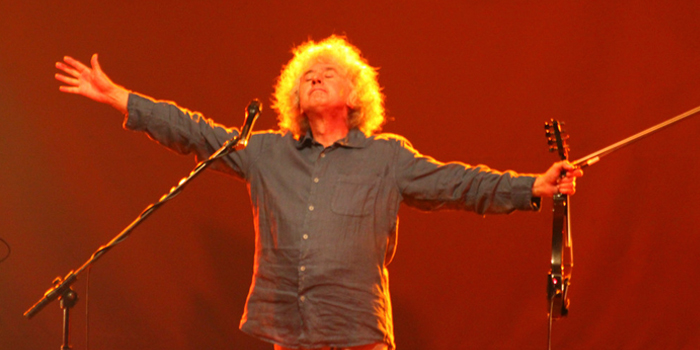 Angelo Branduardi is born in Cuggiono close to Milan. When he has a few months his family settles in Genoa and there, at the Conservatory Niccolò Paganini, Angelo gets the diploma of violin and starts like soloist with the orchestra of the Conservatory. At the age of fifteen Angelo moves again, this time to Milan, where he joins the Technical institute for Tourism, where he knows and has for a long time as professor the great poet Franco Fortini. Thereafter he joins the university of Philosophy and during this period begins to compose, putting in music the texts of his favorite authors: "Confessioni di un malandrino" by the Russian poet Esenin, one of his songs more famous, dates indeed of these years. In the beginning of the 70's, Angelo meets Luisa Zappa, who thereafter will become his coauthor, as well as his wife.

Here are the dates and the stages of his extraordinary career:
1974 – recording beginnings: the RCA publishes the album "Angelo Branduardi" arranged by Paul Buckmaster.
1975 - "la luna", in collaboration with Maurizio Fabrizio.
1976 - Branduardi changes recording house and signs with Polygram for Italy and Ariola for the rest of Europe.
He publishes" Alla fiera dell’est" that is worth him the Price of the Italian Music Critique.
1978 - "La Pulce d’acqua" in which he participates as host, the sarde musician Luigi Lai, virtuoso of the launeddas, ancient wind instrument.
To this album continuation makes a long tour that brings Branduardi in all the Europe.
1979 - release of "Cogli la prima mela ", album to big success in all the Europe rewarded by the German and European critique.
The same year Branduardi performs in Paris to the "Fête de l’humanité", with a public exceptional of 200.000 people.
To the event continuation makes, in 1980, the publication of the album live "Concerto ".
1980 - starts the tour "La Carovana del Mediterraneo” that receives like permanent guests Stephen Still, Graham Nash and Ritchie Havens.
1981 - Branduardi starts a collaboration with Paul Buckmaster for the "Branduardi" album, that is worth him in Germany the price of better artist of the year.
1983 – he publishes "Cercando l’oro", arranged by Maurizio Fabrizio to which, makes continuation a tour European of more than 50 concerts.
In the same year Branduardi begins to work for the cinema.
He composes the music of the movie of Luigi Magni "State buoni se potete" for which he receives the two more prestigious Italian prices: the "David di Donatello” and the "Nastro d’argento. "
Immediately after Branduardi works with the German producer J. Schaaf to the film adaptation of "Momo", the famous novel of Michael Ende.
Thereafter, always with Magni, for "Secondo Ponzio Pilato" and with Aurelio Chiesa for "Luci lontane."
1984 - Italian tour whose gains are affected to the Unicef.
1985 - release of "Branduardi canta Yeats”: ten poems of the great Irish poet W. B. Yeats translated and adapted by Luisa Zappa and put in music by Branduardi.
1988 - "Pane e rose"
1990 - "Il ladro"
1992 - Branduardi signs with EMI and publishes in all the Europe his first "Best of."
1993 - "si può fare", excellent success as well with the public than the critique, followed by a European tour of more than sixty concerts.
1994 - "Domenica e Lunedì". The authors of the texts, in addition to Luisa Zappa, are Paola Pallottino, Eugenio Finardi, Roberto Vecchioni and Pasquale Panella.
In November of the same year starts a tour that brings Branduardi in twenty theaters in Italy and in more of sixty European localities.
Of this tour is born the album live "Camminando camminando."
In the album are included two unpublished works, recorded in studio with texts by Giorgio Faletti, thus marking the beginning of a happy friendship and a collaboration that will continue with the realization of "Il dito e la luna", in 1998.
1996 - he publishes for EMI Classics the first "Futuro Antico", achieved with the group "Chominciamento di Gioia" and conduced by Maestro Renato Serio: sacred and profane pages of the Middle Ages and the beginning of the Renaissance.
1998 - "Branduardi Studio Collection": 33 songs that retrace the discography of Branduardi.
1999 - "Futuro Antico II" dedicated to the music of Mainerio (15th and 16th Century)
2000 - "L’infinitamente piccolo": eleven songs on the texts pulled from the Franciscan Sources.
With the involvement of international artists, as Madredeus and I Muvrini and of the Italian artists of prestige as Ennio Morricone, Franco Battiato and the Nuova Compagnia di Canto Popolare.
To this album, dedicated to Holy Saint Francis of Assisi, he made a continuation tour that gets a big and unexpected success and continues for all through the year 2001, arriving beyond the 120 concerts in all the Europe.
2002 - "Futuro Antico III", dedicated to music in the court of the Gonzagues, in collaboration with Francesca Torelli, specialist and virtuoso of the lute.
2003 - "Altro ed Altrove". Words of love of the faraway peoples. Translated and adapted by Luisa Zappa, put in music by Angelo Branduardi and illustrated by Silvio Monti.
2005 - "Branduardi Platinum Collection."
2005 - "The Classic Collection".
2006 -Tour "La Lauda di Francesco" and tour "Il concerto di Angelo Branduardi".
2007 - "Futuro Antico IV", Venezia e il Carnevale. with the Ensemble "Scintille di Musica" of Francesca Torelli. 2007 - "La Lauda di Francesco" in DVD - Lo Spettacolo, Il Backstage, con interventi di Angelo sulla vita di San Francesco
2009 - "Futuro Antico V", Musica della Serenissima. With the Ensemble "Scintille di Musica" of Francesca Torelli. Pubblication of the new "pop" Album with title "Senza Spina" , arrangiaments by Maurizio Fabrizio.
Tournee in Germany in the main Cities. "Futuro Antico VI", Roma e la Festa di San Giovanni. With the Ensemble "Scintille di Musica" of Francesca Torelli.